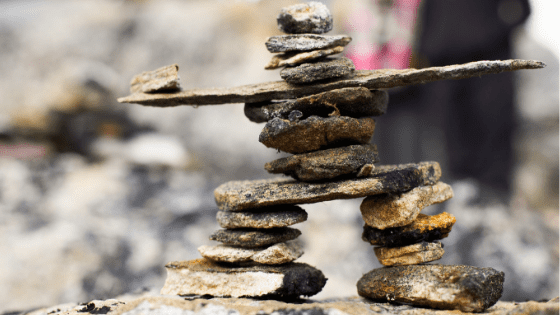 Balancing Act: The History of Rock Cairns and Why Stacking Rocks is Discouraged in Zion

If you’ve spent any time in Zion or just about any other national park, you’ve likely seen a rock cairn or two. These serene, colorful stacks of rocks seemingly defy the laws of gravity. They range from tiny towers of little more than pebbles to small boulders balanced one atop the next.

They seem harmless enough. And when used correctly, they are important navigational tools.

Unfortunately, these rock towers can also be dangerous and harmful to the environment. Keep reading to learn the history of rock cairns, and why national parks like Zion are asking visitors to stop creating them.

The History of Rock Cairns

Rock cairns have appeared countless times throughout history. The name originates from a Gaelic term that means “heap of stones.” It was likely first coined by Scots who used them to mark trails across grass-covered, hilly landscapes. In the Andes Mountains and Mongolia, rock cairns were used to mark routes to safety, to food, and to villages. Early Norse sailors used them to mark the land, long before lighthouses came into use. Other groups used them to mark gravesites, for ceremonial purposes, or even to hide caches of food supplies.

When European explorers started making their way along the Arctic coast, they left cairns of their own with messages hidden within. In many cases, these messages would be an explorer’s last. To that end, they also dismantled many cairns left by indigenous people, thinking that they had instead been built by their fallen comrades leaving messages behind.

In the American Southwest, it’s unclear exactly when rock cairns began to be used to mark trails. Evidence suggests that Native American tribes used stacks of rocks to mark burial sites and create memorials. But dating rock cairns is nearly impossible, so scientists and archeologists have no way of knowing when the earliest stacks were built.

Why Rock Cairns are Perfect for Navigation

In national parks in the North, Northeast, Midwest, Northwest, and much of the South, rock cairns may seem largely unnecessary for marking trails. This isn’t to say that cairns aren’t found there, but they aren’t actively in use for navigation. Trails carved through forests and grasslands leave clear, obvious marks in the undergrowth.

In a desert, trails become much less obvious. Even with frequent use, trails may be tough to spot. Dry run-offs and creek beds look a lot like well-worn trails, which can lead to confusion. Landmarks can also be difficult to use. If you are new to an area, every hill and rock is going to look the same after just a couple of hours on the trail. That’s where rock cairns come in. Unique stackings can be used to guide hikers and keep them on the right trail. In backcountry areas where trails are less frequently traveled and not well marked with signs, these figures are invaluable.

Rock cairns are used on backcountry trails across the nation. Even in areas where trails are clear, less-used trails can sometimes become overgrown, and some areas, where there are several trails that intersect, require special markings to tell them apart.

One man who frequented Acadia National Park in Maine over a century ago is known for creating a unique rock cairn that was used to mark east-side trails while the ranger served. Waldron Bates was a sportsman and early advocate for the national parks. In fact, he was one of the lead authors of the earliest map of Acadia. Before his death in 1909, he helped create and mark trails throughout the park, often using rock cairns.

Now called Bates Cairns, these structures featured two rock stacks, each with either a single, larger rock or two smaller rocks stacked, spaced inches apart. Then, a long rock is used to bridge the two stacks, often topped with another rock. These were  Bates Cairns are still used on Acadia trails today, with rangers working to preserve and repair them.

Why Creating Your Own Rock Cairns in National Parks is Illegal

While rock cairns are a valuable tool and a glimpse into the history of early navigation in our national parks, creating your own isn’t just discouraged, but is also technically illegal. While not always widely enforced, rangers consider these stacks to be “rock graffiti” and will take them down when they’re spotted or discourage visitors caught building them.

Besides distracting from the natural beauty of our parks, building rock cairns disturbs the habitats of bugs, reptiles, and small mammals that live under rocks. It can dislodge plants growing there, and even the soil, which is already delicate in the desert. When too many rocks are removed from an area, erosion may worsen, washing even more plants and animal life away in the next rain or flash flood.

Alongside riverbeds, rocks are even more important. Invertebrates use rocks for shelter and breeding purposes. When a rock is removed, it exposes those invertebrate, leaving them vulnerable. Rock cairns pose a serious safety issue as well. When built on cliffs or hillsides using large rocks, they could tumble and fall on hikers far below.

Adding to existing rock cairns is also a big mistake. If these cairns were constructed by park officials, you could be making them impossible to read as trail markers.

Zion National Park is home to over 200 square miles of unspoiled wilderness. During your visit to the park, help to keep it that way by always following the rule of “leave no trace.” Besides never building rock cairns, steering clear of wildlife, picking up trash, and staying on marked trails are all important.